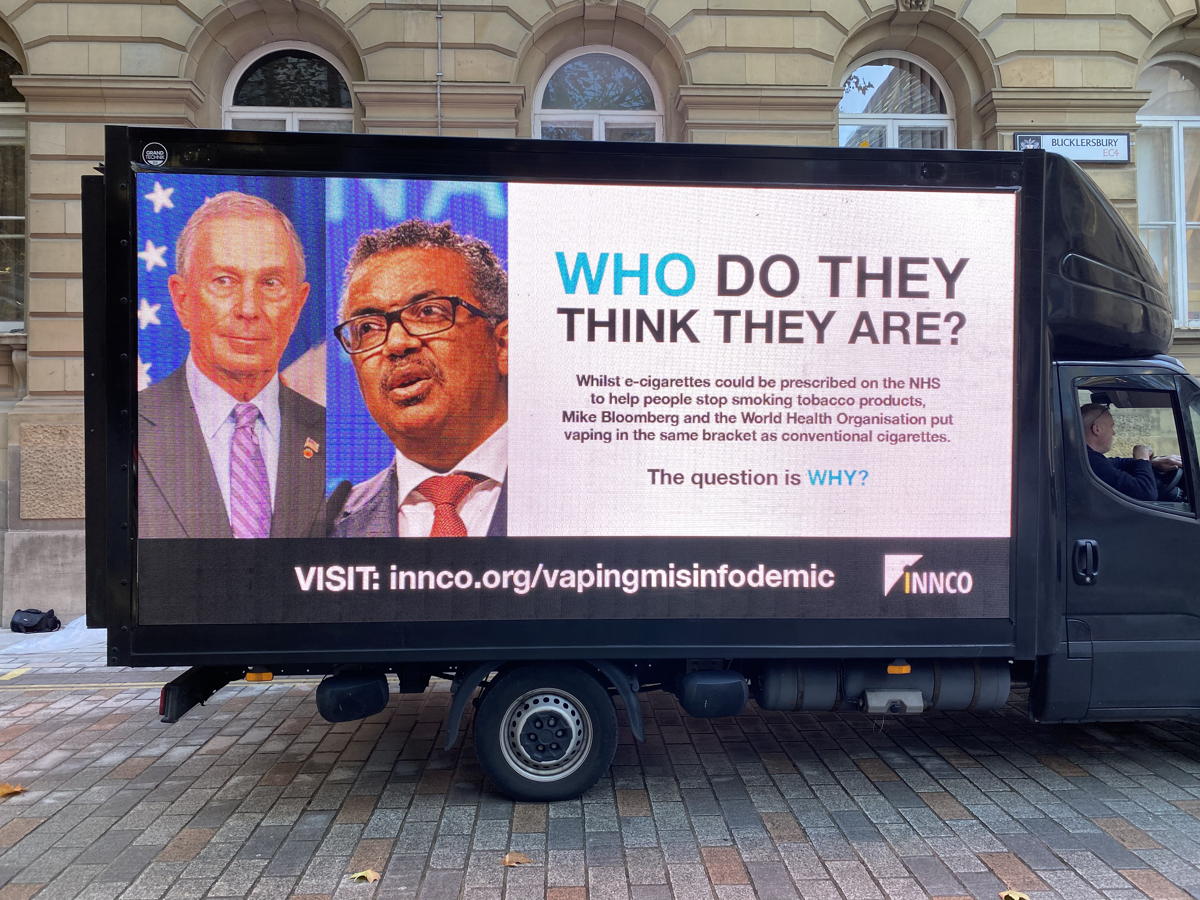 A new report, published on 9 November, has raised major questions on the anti-vaping arguments and approach of the WHO, and US businessman Mike Bloomberg.

Both the UN agency and Bloomberg, a former mayor of New York City, have been known for their opposition to safer nicotine alternatives despite growing evidence of lower harm and efficacy for smoking cessation.

In July of this year, the two parties restated their joint position at the launch of the WHO’s 8th Report on the Global Tobacco Epidemic: Addressing New and Emerging Products. In this report, the WHO emphasised that Electronic Nicotine Delivery Systems are “a threat to tobacco control,” are harmful, and should be banned or highly regulated.

Bloomberg, in his capacity as the WHO Global Ambassador for Noncommunicable Diseases and Injuries, and founder of Bloomberg Philanthropies, has commented that tobacco companies are marketing new products such as e-cigarettes to “hook another generation on nicotine.”

Now a dossier compiled by International Network of Nicotine Consumer Organisations (INNCO), which represents former smokers who have quit smoking using alternative nicotine products, puts major question marks on the mutual stance of the WHO and Bloomberg towards safer nicotine alternatives to smoking and the relationship between the two parties.

The report, titled ‘Bloomberg, WHO and the Vaping Misinfodemic’, highlights nine reasons why serious question marks need to be raised about WHO and Bloomberg’s outright opposition to safer nicotine alternatives to deadly smoking. High on the list is their failure to distinguish between smoking addiction and nicotine dependence.

“Effectively, through this failure they are shifting the harm focus from smoking to tobacco to nicotine – where it obviously doesn’t belong: nicotine does not cause cancer, heart or lung disease. Smoking does,” Charles Gardner, executive director at INNCO said.

The dossier comes as the WHO hosted 9th Conference of Parties (COP9) on tobacco control on 8-13 November, with government delegations from around the world meeting virtually this year to discuss tobacco and nicotine policy under the Framework Convention on Tobacco Control.

The WHO’s role in COP events is also scrutinised, with evidence suggesting that it is very controlling in terms of the agenda and attendance. The COP meetings are described as “all but excluding the media,” “well-known for the routine ejection of the public from proceedings,” and “notoriously secretive”.

The dossier also reports on claims that only tobacco control NGOs allowed to attend are those who subscribe to the WHO’s tobacco harm reduction denialist stance. The All-Party Parliamentary Group for Vaping in the UK has recently issued a warning about the participation at COP9 of The Union, a major global NGO funded by Bloomberg Philanthropies.

“We are a good case in point. INNCO, which represents and supports the rights of 98 million adults worldwide, who use safer nicotine to avoid toxic forms of tobacco, has once again been denied Observer Status at COP9, as it was denied at COP8, and at COP7,” Gardner noted.

In the dossier, the case of ‘EVALI’ (E-cigarette, or Vaping, product-Associated Lung Injuries) is also put under the spotlight. A US-only outbreak of lung injuries caused by bootleg THC (cannabinoid) vape oils “cut” with one or more adulterants, in 2019, was wrongly reported to be caused by legal nicotine vaping.

The EVALI outbreak was reported as triggering Bloomberg to invest $160 million (£118m) through Bloomberg Philanthropies, over a three year period, to prohibit all e-cigarette ‘flavours’ (other than tobacco flavour). EVALI is also still incorrectly referenced by the WHO in its Q&A on vaping products in response to the question as to whether e-cigarettes cause lung injuries.

However, by early 2020, US authorities identified vitamin E acetate, a cutting agent used in some bootleg THC vaping oils (mainly in US states where cannabis remains illegal), as the “primary cause” of the outbreak.

As reported in the dossier, last month, 75 global experts with no tobacco industry ties, including seven individuals who have served as President of the Society for Research on Nicotine and Tobacco, wrote to the director of US Centers for Disease Control and Prevention asking her to change the name of EVALI because it fails to alert THC vapers to their potential risks, and it misleads smokers and nicotine vapers to believe e-cigarettes were the cause.

The dossier raises a number of other key questions about WHO and Bloomberg including:

Gardner, who has spent 30 years in global health, including three years as a senior advisor to the WHO, said he has never seen “anything as crazy” as what’s happening now in tobacco control.

“There are 1.1 billion smokers now in the world, a situation that has barely changed in the last 20 years.  The anti-harm reduction conservatism of the WHO and Bloomberg is not working,” he said.

“That’s why we are calling for a global response in the form of a Tobacco Harm Reduction Working Group and international governments collectively questioning and challenging the WHO and Bloomberg’s prohibitionist and evidence-denialist approach to safer nicotine.”