Home News JUULpods Rich Tobacco: How does the new flavour shape up?

JUULpods Rich Tobacco: How does the new flavour shape up? 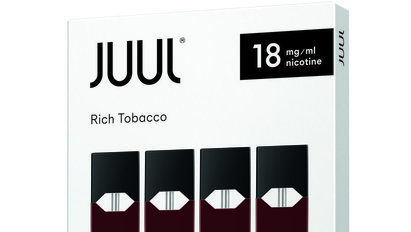 A new tobacco flavour from Juul comes just in time for the arrival of Stoptober this month.

Rich Tobacco is certainly the most satisfying tobacco flavour the firm has produced so far but the strength of the new flavour, ironically, lies in where it swerves from the true smoking experience. There are capsules out there that, in getting even closer to the taste of a cigarette, end up providing the innocent vaper with the unwanted aroma of a stale day-old ash tray or dusty pub carpet. Rich Tobacco, instead, offer the sweeter taste of a pouch of unlit tobacco.

The new flavour joins six other flavours in the JUULpod range including Alpine Berry, Glacier Mint, Royal Crème, Golden Tobacco, Mango Nectar and Menthol and it’s difficult to imagine that many quitters wont eventually transition to the fruitier flavours once they realise that its the nicotine – and not the taste of cigarettes – that they’ve been enjoying all these years.

In the meantime, Rich Tobacco offers a much tastier tobacco flavour than any cigarette on most store’s gantry.